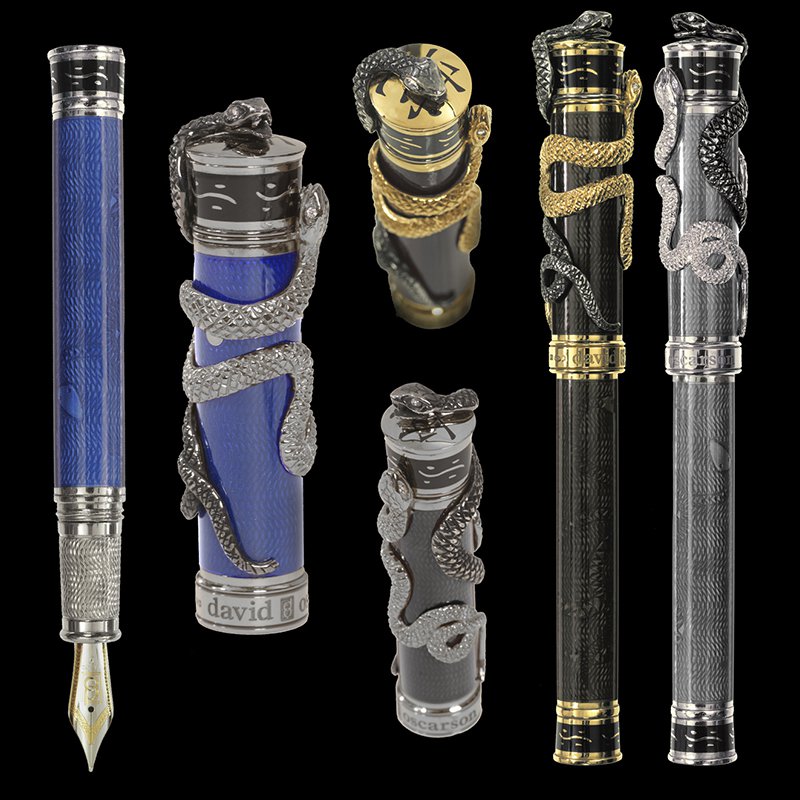 The Black Water Snake is the twentieth in the David Oscarson™ series of Limited Edition Writing Instruments. Produced in three primary color variations, each will be limited to production of 88 pieces (including Fountain Pen and Roller Ball styles).

Dating back to 3000 BC, the Chinese Snake represents rebirth; it rides on the glory of the Dragon and can bring great achievements and success. The Snake is associated with beauty and wisdom, esoteric knowledge and spiritual discovery; it is subtle yet refined, subdued yet shrewd, calculating but full of grace, reserved yet powerfully sensual. The Chinese Snake represents turmoil and transformation as well as opportunity and enthusiasm; Chinese mythology holds that a half-human snake was the father of the Chinese emperors.

The Year of the Snake takes place every 12 years and according to the Chinese calendar, 2013 is a strong Water year. Since the color of Water in the Chinese Astrology Five Elements System (Metal, Water, Wood, Fire and Earth) is related to Black, 2013 is a Black Snake, Water Snake, or more precisely a Black Water Snake year. And, while the Snake’s fixed Element is Fire, Water is the element that guides a Snake to greatness.

The Black Water Snake Collection is a follow-up to the 2012 Black Water Dragon. Crafted from .925 Sterling Silver, this intricate design incorporates multiple levels of diamond-cut Guilloché engraving and a combination of Translucent and Opaque Hard Enamels. Translucent and Opaque Hard Enamels are repeatedly kiln-fired and filed by hand, resulting in the beautiful and enduring finish of this magnificent Collection piece.