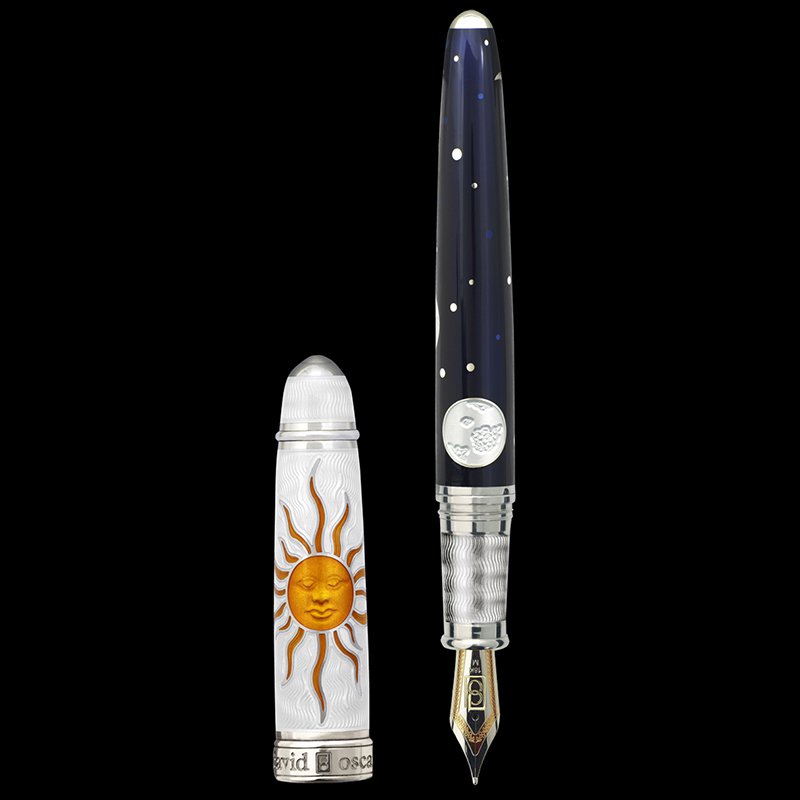 The Celestial is the eighth in the David Oscarson™ series of Limited Edition writing instruments. Produced in five color variations, each will be limited to an aggregate production of 88 pieces (including fountain pens and roller balls).

The Celestial Collection continues in the spirit of artistic mastery and the tradition of Old World craftsmanship by combining the centuries-old technique of Guilloché with the art and expertise of Hard Enamel.  Each Collection piece is engraved with multiple levels of Guilloché, then adorned with multiple colors of Hard Enamel. The five breathtaking color pairs featured on the caps stand in bold contrast to the translucent midnight blue hard enamel on the barrels.

The sun and sunburst designs featured on the Celestial cap require multiple levels of engraving; the rays of the sun remain in high relief while the sunburst pattern in the background features occasional omissions in engraving, reflecting heat and solar flares. Most remarkable perhaps is the three-dimensional face of the sun engraved on the tapered and rounded surface of the cap.

The level of difficulty involved in the moon and stars featured on the Celestial barrel equals that employed on the cap. The four phases of the moon (new, quarter, half and full) are outlined in high relief while the stars are represented in various widths and depths. Three different diameters of stars are featured in high relief and three in low relief (above and beneath the midnight blue enamel) as a reflection of the midnight sky.