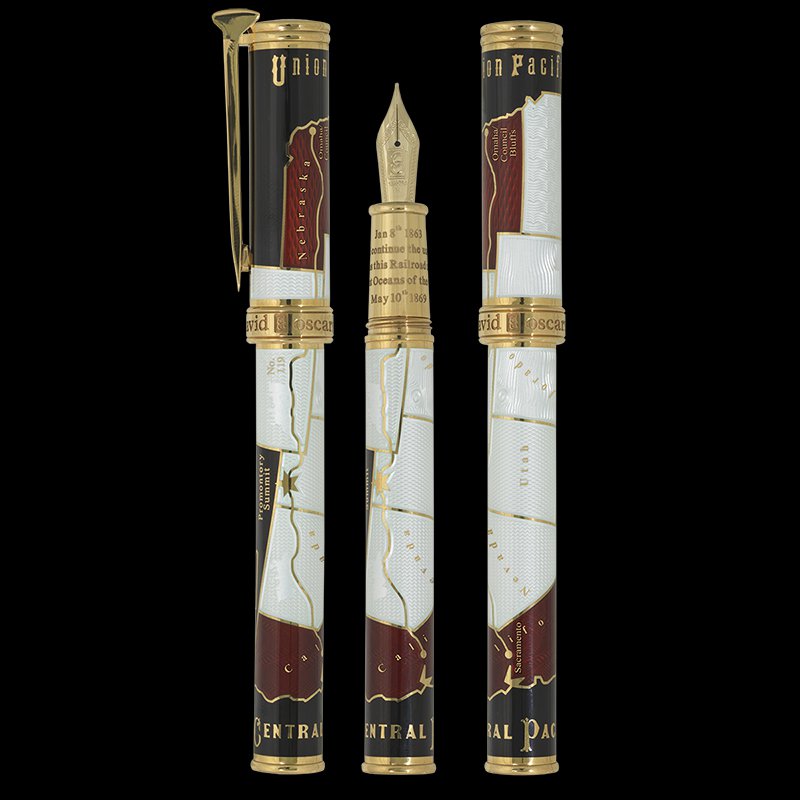 On May 10, 1869, four years after the Civil War, the world’s first transcontinental railroad was completed as the Central Pacific and Union Pacific railroads met at Promontory Summit, Utah.

The two engines, Union Pacific’s No. 119 and Central Pacific’s No. 60, known as Jupiter were drawn up face-to-face. Workers, dignitaries and press watched and cheered as Leland Stanford, president of the Central Pacific drove the Golden Spike into the rails, officially connecting 1,756 miles of track, uniting the Atlantic and Pacific oceans across the United States.

Meriwether Lewis and William Clark had previously (1804 – 1806) charted and documented the vast new region of the US acquired through the Louisiana Purchase. The Corps of Discovery prepared the first maps and reports describing the topography of the trails and passages from the Mississippi River to the Pacific Ocean. “Future generations” Jefferson predicted, “would fill up the canvas we begin”.

From 1835 onward, many Americans wrote and spoke about their belief that it was the “manifest destiny” of the United States to expand its territory over the whole of North America to extend and enhance the nation’s political, social and economic influence.

Development of the transcontinental railroad began in 1832, although it wasn’t until 1853 that Congress approved the funds to survey and plan the course. Construction officially started in 1866. Workers, many of whom were Chinese or Irish immigrants, put in long hours under harsh conditions. During the winter of 1867, Chinese workers for the Central Pacific line carried three train engines, forty railroad cars and all of their equipment – rails, spikes, hammers and food - over the snow-covered Sierra Mountains to lay fifty miles of track on the other side the following spring.

It’s not known how many people attended the ceremonial event in 1869; estimates range from as low as 500 to as many as 3,000. Parades and celebrations ensued as telegraph operators clicked off the news that the Great Pacific railroad was finally completed.

Today, the official Golden Spike used in the ceremony is displayed in the Cantor Arts Center at Stanford University, founded by Leland Stanford, who also served as a Republican governor and senator from California. The Golden Spike National Historic Site, which marks the historic uniting of the lines, lies 32 miles west of Brigham City, Utah.

The Golden Spike Collection stands as a tribute to the more than 4,000 workers who participated in the magnificent feat of connecting the Atlantic and Pacific oceans by rail.

The courses of the two engines, Jupiter (Central Pacific) from Sacramento, California and No. 119 (Union Pacific) from Omaha, Nebraska / Council Bluffs, Iowa are outlined along the cap and barrel of the pen, meeting at Promontory Summit, Utah.

Each of the seven states along the journey is marked in high relief and each is engraved with a unique guilloché pattern. The two engines are illustrated in a reverse-engraving underneath the enamel.

The gripping section is engraved with start (Jan 8th 1863) and finish (May 10th 1869) dates. Between the dates are the following words that are engraved on the original Golden Spike: “May God continue the unity of our Country as this Railroad unites the two great Oceans of the world”.

The Golden Spike Collection thirtieth in the David Oscarson™ series of Limited Edition writing instruments and will be produced in two design variations; each limited to production of 150 pieces (including fountain pens and roller balls).

The Golden Spike Collection will be produced in the following color variations: